The eight-day Jewish celebration known as Hanukkah begins December 18 this year and ends on the evening of December 26. Often called the Festival of Lights, the holiday is celebrated with the lighting of the menorah, traditional foods and gifts.

Every year, usually in mid- to late-December on the Western calendar – Kislev 25 on the Hebrew calendar – Jewish people around the world celebrate the holiday of Hanukkah. In a recent conversation with two RBC colleagues, we learn that while Hanukkah is celebrated differently by different people, it is an occasion honoured with traditions passed through the generations.

Hanukkah commemorates the rededication of the Second Temple in Jerusalem during the Maccabean Revolt during the second century B.C. As David Cohen, Managing Counsel at RBC Capital Markets US explains, “Hanukkah is a celebration of the strength and the resilience of the Jewish people, which is a reoccurring story.”

During the war, the Temple was desecrated and the eternal flame was snuffed out. When retaken by the Maccabees, the Temple had only enough oil for the eternal flame to last one day. However, by a miracle from God, that small amount of oil was able to last for eight full days, giving the Maccabees enough time to procure more. As a celebration of the triumph of light over darkness, Hanukkah’s most sacred tradition is the lighting of the candles for eight nights.  Candles are lit on a menorah (also called a hanukkiyah), a nine-branched candelabra used only during Hanukkah – eight branches for each night of the holiday, plus another branch (often taller, central, or more prominently displayed) for the shamash (helper) candle, which is used to light the others.

A celebration rooted in family, food and following traditions

The ways in which Jewish people celebrate Hanukkah may be as varied as the ways in which one can spell the word. In conversation with Jill Anzarut, Chief of Staff to RBC’s Chief Administrative and Strategy Officer, she explains that there are several ways to spell the holiday in English, including “Hanukah,” “Hanukkah,” “Chanukkah,” and “Chanukah.” “It’s because we are using a Hebrew word that doesn’t exist in the English language,” she says, laughing at the auto-correct that inevitably kicks in when she spells it with a “CH”. 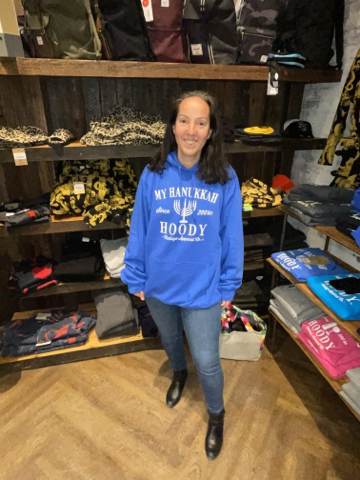 Jill explains that in her family, Hanukkah is not as significant an occasion as other holidays on the Jewish calendar such as Yom Kippur and Passover. Still, it’s a joyous time of year that is marked with family traditions and memories. “We have some wonderful traditions of lighting the candles together, gathering as a family – and that’s really beautiful for me. We also eat traditional Jewish foods, such as latkes – the smell of latkes cooking is one of the strongest associations for Hanukkah to me.”

While oil may no longer be the only source of light at Hanukkah, it still plays a meaningful role over the holiday. Foods fried in oil—like Jill’s potato latkes and jelly donuts (sufganiyot)—are a main feature of the festivities and a nod to the Hanukkah miracle being celebrated. “Everyone has a different latke recipe,” adds David, who says that “food is another opportunity to get together with family.”

For both Jill and David, gathering with family is one of the most important and meaningful traditions of the holiday. “Our celebrations are really focused on family – getting together, singing songs, eating traditional foods and lighting the menorah,” says David.

His family puts the menorah in their front window, so it’s visible to the public. “It’s an affirmation of our Judaism and an opportunity to show that we’re proud to be Jewish and this is our tradition.” Jill adds, “the candles are the most significant part of the tradition of the holiday – they are at the heart of Hanukkah.”

Because Hanukkah and Christmas take place around the same time each year, there can be a tendency to expect that the traditions and meaning behind both occasions are similar. “While both religions have a holiday around the same time of year, they’re different celebrations,” explains David. “For Jewish people, Hanukkah is a celebration of the strength of God and the three miracles that took place – the miracle of winning the war, the rededication of the Temple and the miracle of lights.” – and for Christians, the holiday of Christmas is the celebration of the birth of Jesus Christ.

“We do, however, have Hanukkah sweaters,” he adds, “which are a direct reaction to the proliferation of festivesweaters – we’re not immune to that.”

While gift giving has a place in Hanukkah tradition, the role it plays varies from family to family. For Jill, gift giving plays a minor part.  “There are people who do a lot of gifts over all eight nights. In my family, we may give something small just to say Happy Hanukkah.” In David’s family, gifts are given to children, which may be tickets to a family event, something they need for school or a small token. “When the kids were smaller, there was more focus on gifts, now there’s more focus on family.”

Both agree that regardless of one’s religion, this is a wonderful time of year. “We received some cards in the mail yesterday,” says David. “Some said Happy Holidays, some said Merry Christmas. We put them all out because it’s nice celebrating one’s happiness together.”

May this Festival of Lights bring blessings for happiness and health upon our Jewish friends, neighbours and colleagues.