While many awards celebrate the achievements of senior industry leaders, few recognize the potential of mid-level talent. WeAreTheCity's Rising Star Awards, powered by RBC, focus on women who represent the next generation of leaders.

As Vanessa Vallely OBE was rising through the ranks of her corporate banking career, she began to look around the room for other women at the table. She found she was often the only one. This lack of gender parity among leadership inspired her to found WeAreTheCity, a community to help raise the profile of women. Several years later – after the community grew to become one of the biggest networks in the UK – Vallely launched the Rising Star Awards, which recognizes women below the senior management and director level across a broad range of industries. 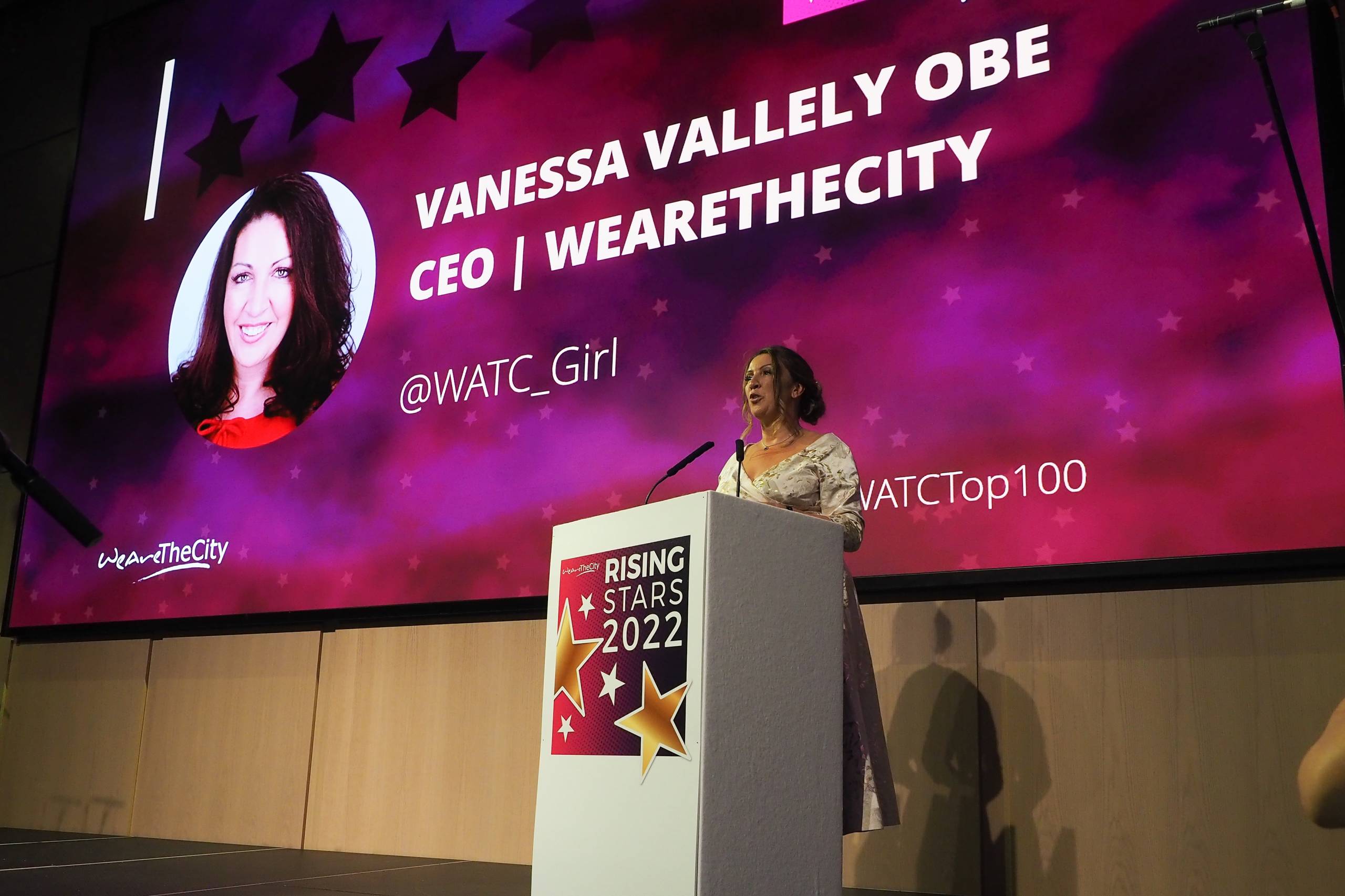 “You get to a point in your career where you realize how important it is to give back and pull others up as you climb,” says Vallely. “For me, it was a matter of creating something that would help women access the resources they needed to drive their own careers if they weren’t necessarily getting the support they needed from their corporate employers.”

When Vallely started the Rising Star Awards in 2015, there were many awards that celebrated very senior women. But she found that it was women at the mid-level who were experiencing the most pain points – bringing up families, in line for a promotion but not quite getting there – so she wanted to create something that would focus on that demographic of women but also help them in their careers after the awards.

Now in their eighth year, the Rising Star Awards are the first to focus on the achievements of women below the Senior Management or Director level, representing the female talent pipeline of the future. Every year, the Rising Star Awards celebrate 100+ individual female contributors that represent the leaders and role models of tomorrow from across 20 categories representing different industries and professions – from banking to not-for-profit, defense to education, healthcare to infrastructure, hospitality and more. The awards also include a category called Men for Gender Balance, which celebrates men who are championing women and gender balance either inside or outside their organization. “There are a lot of incredible men doing a lot of work in this area, so we created a category to celebrate them and position them as role models for other men to follow,” explains Vallely.

A dedicated partner has helped scale the awards

Royal Bank of Canada (RBC), UK, has been a headline sponsor of the Rising Star Awards since 2019, helping to grow the awards in participation, profile and prestige. Desirée Clarke Noble, MD and Head, Brand and Marketing, Europe and Asia-Pacific at RBC Capital Markets, emphasizes the need to celebrate people doing a great job at every level.

“You don’t know where the talent sits in your organization,” says Clarke Noble, who started out her career as an Executive Assistant before working her way up the corporate ladder to a senior leadership role. “Senior people get recognized and celebrated all the time, just by the fact that they are senior.” She explains that as women come up through an organization – particularly in finance – there is a big drop-off at the director level. “Suddenly, they just disappear from the industry,” she says. “For me, it was vitally important that we support something like this because there is such talent within organizations – but if that talent doesn’t feel they are being supported or celebrated, you lose them. And then you never know where the talent was or where they could end up. I never thought when I was an EA that I would end up being an MD at a major bank. The difference Vanessa and her team are making in supporting gender diversity is phenomenal, and I am hugely proud that RBC is part of the journey.”

Due to the COVID-19 pandemic, the Rising Star Awards ceremony was held virtually in 2020 and 2021. During this time, the team was able to create a special evening nonetheless, particularly as the virtual format allowed the families of the winners to join. “We had 36 countries represented, and parents and grandparents got to see their daughters pick up the awards,” says Vallely. “We had about 3,000 people watching on the live stream. We were able to create something really special.”

This year, the event was live and in-person – and WeAreTheCity and its sponsors made the most of the opportunity. “It was truly star-studded affair,” says Clarke Noble. “The majority of the winners were there, as well as the judges, sponsors and supporters of the winners. The energy was just amazing because it was the first time in three years they could all get together.” Complete with a red carpet, inspirational speakers and entertainers, glitz and glamour at the new Pan Pacific London, the Awards resembled a night at the Oscars.

The evening was a hit on social media, too. #WATCTop100 was the #1 trending hashtag in London (#9 in the United Kingdom), reaching over 38 million people. 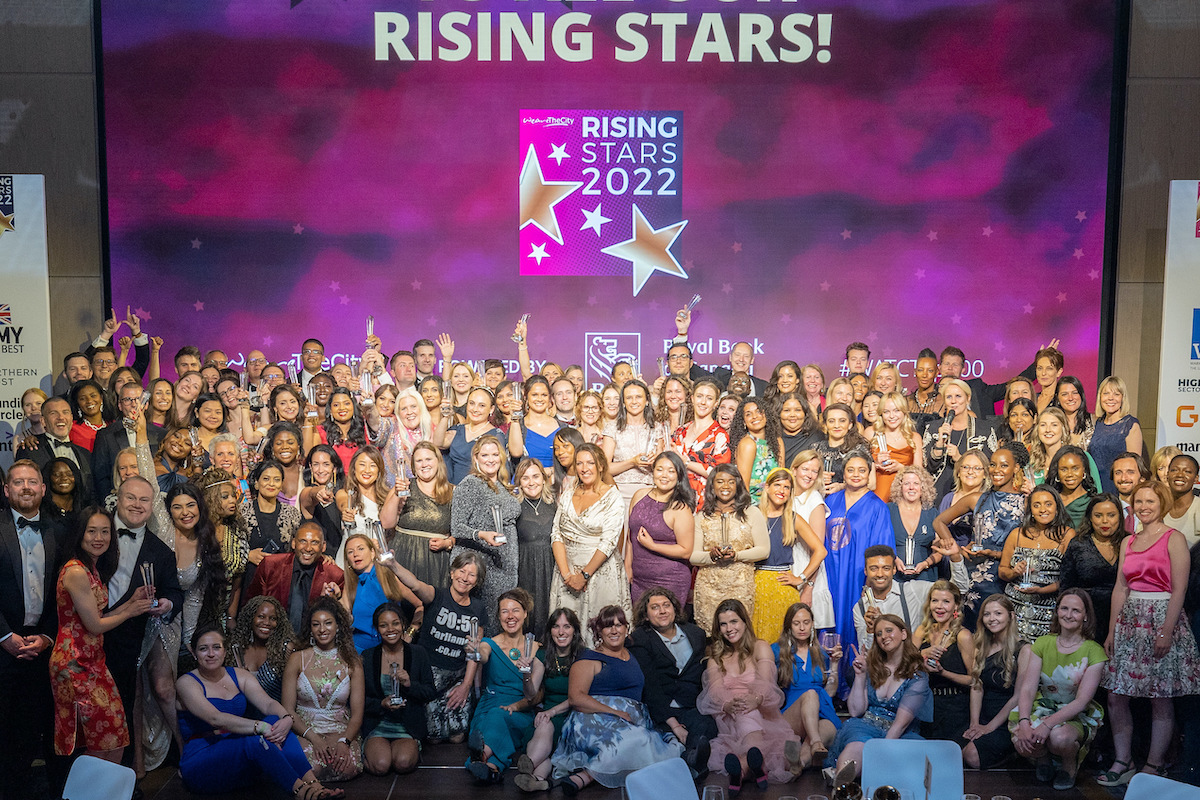 For most of the 850 award winners to date, the award has opened doors and changed their lives. “One lady said to me, ‘before the awards, nobody knew my name. I won the Rising Star Award and everyone knew who I was – my voice was heard,'” shares Vallely.

“Winning a Rising Star Award is equal parts validating, to be able to look back on your journey and to be recognized by your peers and the people you respect and look up to for the work and the contribution that you’ve made, but it’s also really empowering and makes you think ‘what’s next, what else can I go and achieve?’ It’s amazing to have this spotlight put on you to recognize that you have taken the time to make the world a little better than when you found it,” says Ria Johal a Program Manager at Amazon and one of the 2022 award winners.

In line with Vallely’s personal mission to pull others up with you, the Rising Star Awards offers an aftercare package of additional support to give winners the tools and platform to continue rising – and to share their success with others. “After they win, they become immediate role models,” says Vallely, who explains that WeAreTheCity records and shares videos of them with state schools, asking that they pay it forward by telling their stories and getting involved.

It’s one of the reasons Clarke Noble is so passionate about the sponsorship and why RBC signed on to support the awards for another three years. And seeing the success, generosity and impact of the winners inspires Vallely every day. “Seeing the incredible things women are doing and knowing the impact we are making… I know this is where I’m meant to be,” she says. “These women were fabulous long before I came along, but they were in a room where no one was watching. We simply shone a spotlight on them.”

In the pursuit of gender parity across all levels and industries, filling and nurturing the pipeline of female talent is a key step. The Rising Star Awards is one way that up-and-coming women can be given the profile and platform from which to take bold next steps, as they are celebrated for both their achievements and their potential. The next Rising Star awards open for nominations in 2023.