Her journey is defined by one chance meeting. Today she is using her platform as an RBC Olympian and national team athlete to show that representation matters and to help Canadians participate in the process of Truth and Reconciliation.

I grew up in the suburbs of Calgary, where I got pretty used to being different. I was the only Indigenous student in middle school and high school too, I think. My Dad is from Jamaica, so I am also biracial. There weren’t many kids like me.

I spent every summer on my Grandmother’s farm in Manitoba. It’s in a tiny town called Plumas. The population is about 100. My Grandmother is Métis, and it was just she and I out there on the farm each summer. I got to roll in the mud, be on the land, and enjoy all the things that come with being outside.

This farm is where I learned to ride and love horses. I’m competitive, so it wasn’t long before I competed in rodeos in small towns across the province. I also got into show jumping when I was in Calgary. This was my main sport until recently. There certainly weren’t many athletes that looked like me in these sports, but I enjoyed it.

Officially I am Métis from region three Alberta because I lived in Calgary, but my roots are with my Grandmother in Manitoba.

Growing up, there was a stigma around being Indigenous (Black and Indigenous even more so), so I didn’t really embrace my Indigenous roots as a kid. I gave myself a lot of space from it, maybe as a way to get through these years when I already felt so different. But about 10 years ago, I got tired of running from it, so I started learning.

I realized that what made me different also made me special, and that’s the key. It could be empowering.

Yet it was still difficult to see myself as having a future in sport, as I didn’t have any Indigenous or Black role models. This changed when I met Phylicia George, a strong Black woman and track athlete who had gone to two Olympics and then switched to Bobsleigh and won an Olympic Bronze in 2018.

I met Phylicia at the Wickenheiser Female Hockey Festival in Calgary, the year she won her medal. This meeting changed everything.

She encouraged me to try Bobsleigh and was very welcoming. I also found that I could now visualize myself in her shoes because she had done it. She was my first touchpoint in Bobsleigh, and it was comforting on a subconscious level. The impact she had on me made me realize that representation matters. 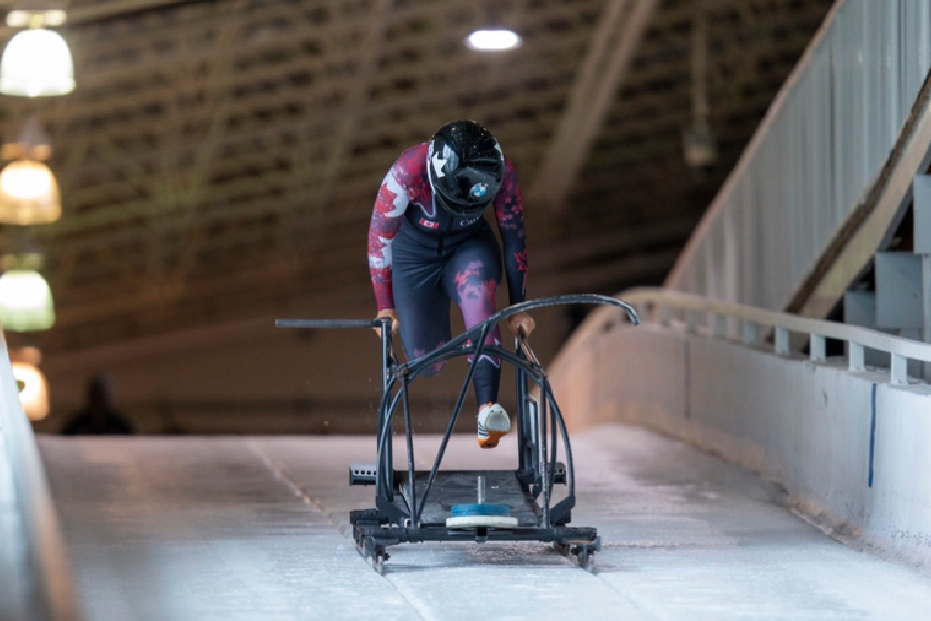 Photo: “I realized that what made me different also made me special,” says Eden Wilson

That feeling still motivates me today. Yes, I want to win medals (since joining the national team in 2020, I’ve won a few medals on the NAC series, and my eyes are firmly on the 2026 Olympics), but I’m in sport for a bigger reason.

As a Black and Indigenous athlete, I am carving out a space for myself because I want young athletes to be able to see that there is a place for us, especially in sports that aren’t traditionally diverse.

I know first-hand from my experience that representation matters. I’ve lived it.

It takes so much courage to be the ‘first’ at anything. I can’t imagine putting that on kids. So maybe I can shoulder it for them, to make it easier.

Beyond sport, as an Indigenous national team athlete, I think I can also help with the Truth and Reconciliation process. Being an RBC Olympian, with all the opportunities to speak in public the program provides, has enabled me to do this.

Truth and Reconciliation can seem so huge, daunting, and frankly depressing. So I would tell Canadians who want to be a part of it to start learning. Start small, like learning about what happened on the lands near your home. What happened to your neighbours?

Education is the key, but don’t put your learning on the people who lived it. Don’t make them share it or relive it. It’s not their responsibility to give you this learning. The onus is on you.

And representation matters. More Indigenous athletes and coaches at the highest levels will mean more Indigenous youth believe it can be done. Let’s make it happen.

About the RBC Olympians Program

The RBC Olympians Program, which began in 2002, is a national initiative that provides elite athletes with an opportunity to gain valuable career experience alongside a flexible work schedule to allow the time necessary to train and compete on the world stage. RBC Olympians act as community ambassadors in cities and towns across Canada — to share past experiences with students, communities, clients and employees. These athlete ambassadors work to champion and raise awareness about the causes that shaped their lives, from the importance of sport in daily life to Truth and Reconciliation.