On International Day of Persons with Disabilities, actress, author and advocate Selma Blair joined RBC for a discussion about the importance of awareness, adaptability and story-sharing in the pursuit of normalizing disability.

UN International Day of Persons with Disabilities is a day meant to continue building awareness and inspiring action to enable the full and equal participation of persons with disabilities in society. It’s estimated that over 1 billion people globally live with a disability, and at some point in our lives, almost everyone will experience or be touched by disability in some form – whether it’s temporary, permanent, visible or invisible. It is widely acknowledged that by sharing stories and by bringing people with disabilities into the conversation, we can support their well-being and foster inclusion.

Selma Blair has a long-standing career as an actress, perhaps best known for roles such as Legally Blonde, Sweetest Thing and Cruel Intentions. In 2018, she was diagnosed with Multiple Sclerosis (MS) after a lifetime of feeling unwell. For Blair, her diagnosis was a sigh of relief, as it explained the physical limitations she was experiencing and the emotional coping mechanisms she had leaned on for years. Blair joined an RBC enterprise-wide event to share her story and her perspectives on interacting with, hiring and supporting people with disabilities.

Selma Blair: A face for People with Disabilities

As a young girl, Selma Blair was in chronic pain, and suffered from depression, bladder issues, headaches and fevers. Feeling so poorly, she felt she didn’t fit in anywhere and attributed the symptoms she had felt to other causes. It wasn’t until a doctor found lesions on her brain that she discovered she had MS. In her conversation with RBC, she admits that she was “thrilled” to get her diagnosis, as it offered an explanation for her condition and enabled her to regain both her story and control of her life. In August of 2018, she made her diagnosis public via Instagram: “I am disabled. I fall sometimes. I drop things. My memory is foggy. And my left side is asking for directions from a broken GPS.”

Today, she advocates for people with disabilities and shares that she feels to be in a unique position to be a face of disability because while she has spent much of her life unwell, she has, in fact, had a very able life. “I’m not speaking for other people or their disability,” she explains. “But being a face of it, it feels very empowering because I get so much feedback from people. We all need to take responsibility for each other. What I’ve learned from being a public face of disability is how much it matters to people to normalize a lot of the things we go through.”

Blair became a very public face of people with disability when she joined the Season 31 cast of Dancing With The Stars (DWTS) in 2022. She initially had some reservations, acknowledging her challenges with mobility and balance and the flare-ups that could significantly impair her ability to move. But her partner encouraged her to work with him to see how it went. “I had never realized that you could choreograph differently for balance issues – there are so many ways to think about it,” she says. “It was the first time I had opened my brain to consider that I could move with a partner holding me in a frame and helping me – and instead of going to the left, where I couldn’t feel or push off on my foot – we could go to the right.” Blair explains that she loved dancing and developed new muscles and self-confidence. But ultimately, she had to bow out of the season due to the strain the dancing was causing on her body. “I was creating a lot of stress fractures and tears,” she explains. “I knew from flares with MS that once I got down, it was really hard to pick myself back up again. I was going to deal with possibly long-term disability or a hip replacement – so I knew I had to take care of myself as a mother who has other jobs.”

While it was heartbreaking to withdraw from the show, Blair explains that it was important in the disability community for someone to set a limit. “We so rarely get the opportunity to do physical things publicly, and we want to prove that we can keep up – but the fact was, I could not. It felt good to listen to myself publicly, and I hope that is something we can normalize – to listen to your needs rather than to betray them.”

While she wasn’t able to see DWTS through to the end of the season, Blair shares that her partner’s ability to adapt to her disability made it possible for her to participate in something so fully and with so much joy. On another project, which was underway when she was diagnosed, she was suffering from serious issues with her balance, vertigo and hearing. She had to tell the producers about her diagnosis yet was terrified of getting let go. But she wasn’t fired, as she had feared. “I had the most amazing producer at Netflix who said, ‘we all have something we have to figure out.’ They brought a golf cart on set so I didn’t use all my energy getting to the set and had people dressing me as I needed it. I was very vulnerable, and these women rallied to help do the job I was hired to do. It was them as allies that changed my mind that I could do this.”

While performing is still extremely difficult for Blair, given the physical strain it presents, she is hopeful about returning to acting in the near future, with the help of allies who can adapt to the needs of everyone on set. She further emphasizes the importance of having people with disabilities in that environment, sharing that they are the ones who will make the set accessible and open the conversation about what is needed to be truly inclusive.

Blair also believes there is room for change in the industry. “People with disabilities are either portrayed as very innocent, as a hero or as a villain. The portrayals are, in fact, very far away from the real human experience, and as a result, our expectations might not match with what people with disabilities are actually capable of doing in the everyday world. Hollywood has always taught a lot of people – we need it to now normalize disability a bit more. There are so many opportunities.”

From the box office to the office tower

It’s not just Hollywood that has the opportunity to adapt and to normalize disability, and her DWTS experience showed that it’s possible to do something others can, just with a few modifications.

When it comes to inclusivity, Blair explains, “it’s a universal thing that we all want people to be kind and have a little more patience.” She explains that for many people with disabilities, like herself, mornings can be harder as it can take more time to get out of bed, get dressed and get to work. “So maybe people with disabilities can come in a little later if they need to.” She admits that when you’re the only person with a disability in your workplace, you don’t want to be the squeaky wheel, so she places responsibility accordingly. “It’s our collective responsibility to understand disability,” she says. “So maybe it’s the employer who asks if they need to come in a little later or if they need certain things to do their job. Work is still possible [for people with disabilities]. It’s just a matter of doing it in different ways sometimes.” She encourages employers to be open minded. “Don’t let yourself be intimated or think, there’s no way that person can do the work. Think about how they could do the work better.” 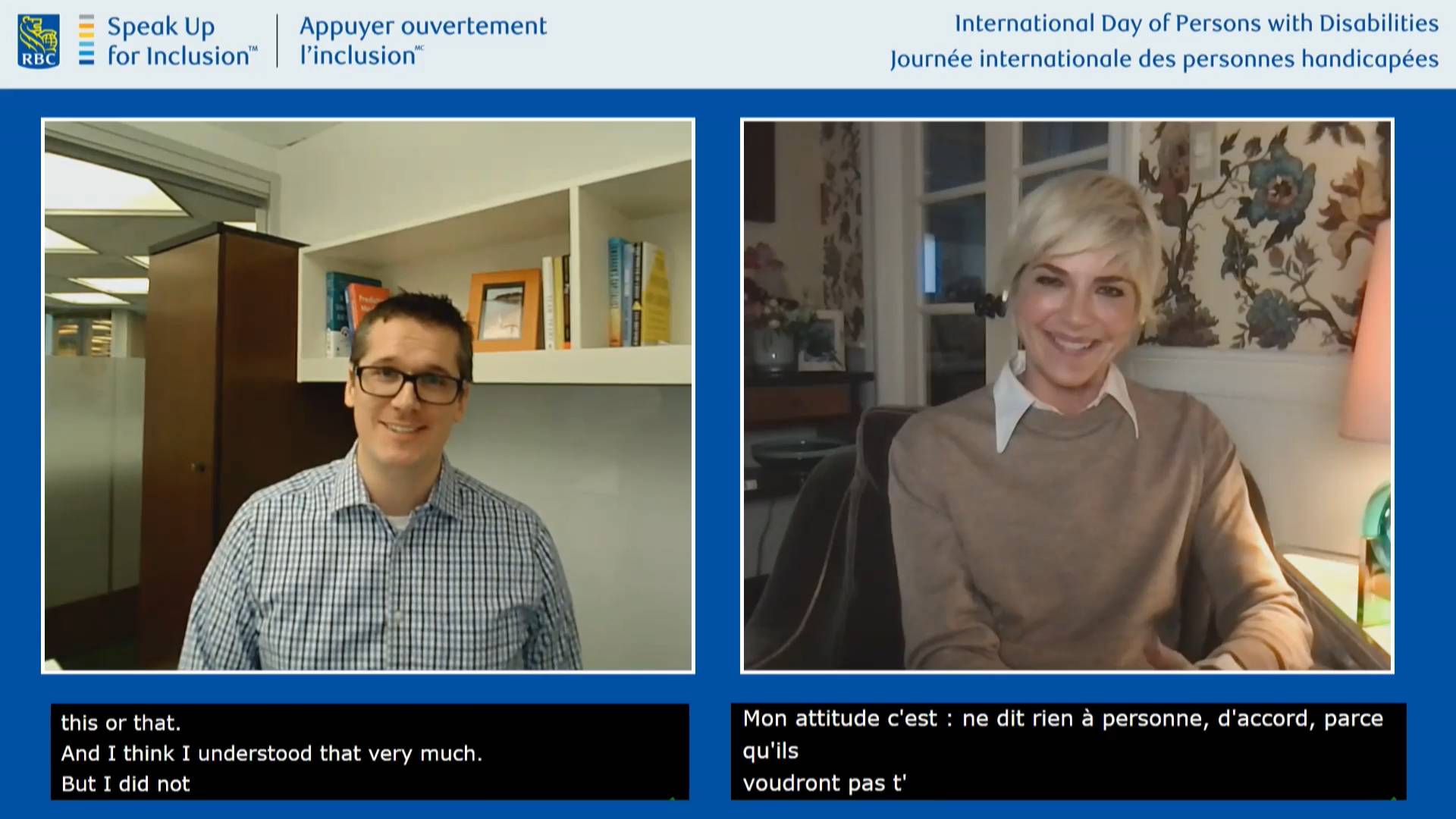 Blair’s book Mean Baby was released in May 2022, heralded as a funny and emotionally shattering memoir in which she tells her story of growing up and finding her truth. In it, she reveals she became an alcoholic at a young age and how her diagnosis made it clear to her about why she drank and engaged in certain “awful” behaviours. “I wanted to share my story for people who have caught themselves in a shame cycle,” she explains. “Shame was holding me back, as was the stigma of my diagnosis.” She wants her book to open up dialogue and help others to create a safe space in which they can share their own truths and identities.

Going forward, she remains committed to having uncomfortable conversations to help normalize disability. “I’ll ask the questions no one wants to ask. I can wind up with egg on my face for the greater good to get to the conversation going, without being worried about being cancelled. I know my intentions are pure.”

Sharing stories, having uncomfortable conversations, raising awareness and promoting open-mindedness at work and in the world can help create an inclusive and accessible world for all, in which everyone has equal opportunity to thrive.